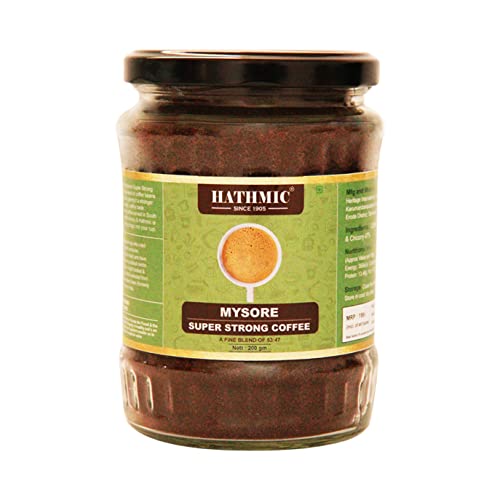 Hathmic Mysore Super Strong Coffee is a blend of Coffee and chicory, giving it a stronger, woody, earthy taste. Most of the Coffee served in South India is with chicory & Hathmic is here to bring back the Coffee magic into the cup. Mysore was the capital of the Wodeyar kings who ruled over the Mysore Kingdom for many centuries. Wodeyars were great patrons of art and music and have contributed significantly to make Mysore a cultural centre. As a brand Hathmic is here to connect the people across the nation & to serve the real Coffee experience to everyone. Hathmic Instant Coffee Powder is light-bodied & wholly aromatic, and the coffee beans (Arabica) carefully selected from coffee estates of Coorg districts of Karnataka State (formerly known as Mysore) in Southern India. We at Hathmic assure the quality and the process involved in making this royal Coffee to Customers.
Hathmic prefers to use the world’s most popular type of Coffee that is Arabica, An earthy Rwanda with a dark chocolate and spice aftertaste that’s complemented by a brief woodsy aroma
Hathmic Mysore Coffee gives the real Punch to reboot our Energy Instantly & it is a perfect blend of 53% coffee and 47% chicory, the Aroma of fresh-made Coffee is one of the world’s greatest inventions & our Coffee stands here

Freelancing: A Beginner’s Guide on Freelance and Remote Work (How to Make Part-time Side...

Confidence: How to Overcome Your Limiting Beliefs and Achieve Your Goals

Grocery myhospy - June 28, 2022 0
With work consuming all our day and life getting increasingly hectic, one is often left with no time to cook something that is...

Stock Market Beginner’s Guide : Everything You Need to Start Making Money in Investing...

Exponential Marketing: Learn the Secrets to SCALE Your Impact and Grow Your Online Business